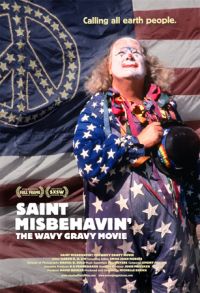 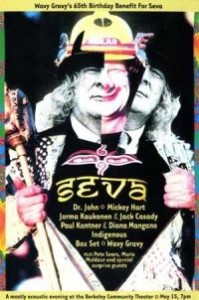 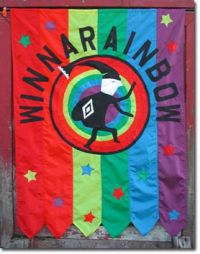 Self proclaimed “old hippy” Wavy Gravy is currently in Austin Texas attending the South by Southwest music festival. Music festivals as well as peace toward others are Wavy Gravy’s forte. Since the first Woodstock, Wavy Gravy has dedicated his life to helping others and keeping the hippie ideals of peace and well intent toward others alive. The film of his life is receiving rave reviews at SXSW and it is regarded as one of the best films being shown. I was recently able to speak to Mr. Gravy and discuss his movie, his foundations, and his thoughts on the hippie lifestyle.

Since the 1960’s Wavy Gravy has taken the ideals from the 1960s and put them into action through various charity work, activism, and unity. “Sticking with it, I’m approaching 73 and have been at it awhile, when I start something I don’t abandon it,” says Gravy. Through his various organizations Seva foundation and Camp Winnarainbow he has offered help in solving global social problems and offering individuals to unite to accomplish common goals. Whether it’s curing blindness in less fortunate countries or teaching juggling, Wavy Gravy is considered in some eyes to be a saint in clown shoes. 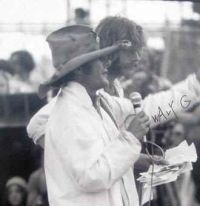 The New York born Hugh Romney was given the moniker Wavy Gravy by B.B. king and eventually made it his legal name. He grew up in the cultural Mecca of the United States in the heart of the Greenwich Village Folk scene and was privileged enough to make acquaintance with Bob Dylan and Albert Einstein. He was only 5 when he met Albert Einstein and says he hasn’t connected with Bob Dylan in some time, but both of which accounts are documented in his book “Something Good for a Change: Random Notes on Peace Thru Living”. His interest in peace, activism, and music led him in the direction that would define his life as an activist clown.

“I became a clown for when I visited children’s hospitals, but when I was invited to demonstrations, I discovered that the cops didn’t want to hit me anymore,” said Gravy. The activist is helped to found Seva, an organization that helps cure preventable blindness as well as curing blindness in various countries, being the founder of Camp Winnarainbow, a place which offers summer sessions for children as well as adults to kick back and enjoy themselves, and the politically neutral campaign known as the “Nobody for President Campaign”.

Seva is an organization that prevents blindness and restores sight in Nepal, Tibet, Cambodia, Bangladesh, Egypt, Tanzania, and Guatemala. Due to the current economic malaise, Seva is “desperately seeking funds” in order to further its works with hospitals to promote wellness in the United States as well as less fortunate countries. The organization is already responsible for helping millions of individuals in regaining their sight as well as tackling other social problems. In an attempt to raise funds, Seva is organizing an acoustic set featuring the Grateful Dead members Phil Lesh and Bob Weir as well as offering signed instruments that will be available on EBay. “It’s a great organization, for the price of a movie ticket, you can restore someone’s sight,” said Gravy. 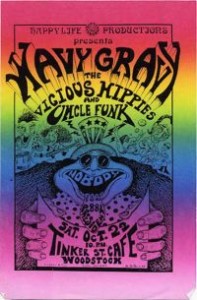 Camp Winnarainbow is a circus and performing arts camp which conducts summer sessions for kids and grown-ups alike. “The adult camp is just like the kid’s camp, except “You get to stay up late and don’t have to brush your teeth. You can even procreate if you aren’t too loud,” said Gravy. The next adult session will take place on June 16-21 and it is “Guaranteed big fun or your money back, and we’ve only had one person ask for their money back,” said Gravy. The camp teaches activities such as juggling, unicycle riding, stilt walking, magic, mime, and many more activities. The camp even has its own film festival where short films are viewed, and guests are able to dress up like famous figures, walk the red carpet, and be interviewed.

Across from the Hog Farm where the camps are held, Gravy has established a store called “Nobody’s Business,” which is a remnant of the “Nobody for President” campaign. Nobody’s perfect, nobody should have that much power, nobody keeps all promises.” These were some of the slogans for the “Nobody for President Campaign”, although Gravy has admitted to voting for Obama. “A lot of anarchists were upset with me when I voted for Obama, I told them that Nobody made me do it,” jokes Gravy.

The activism and charity work that Gravy has been engaged in sparked from the free kitchen him and his group known as Hog Farmers opened at the original Woodstock. Since then, he has attended every subsequent Woodstock and said that “You just never know what to expect, you go in with certain ideas, but you never really know,” said Gravy.

An event comes to mind of Woodstock 1999 where riots took place and some real estate was burned. “Fred Durst of a band called Limp Bizkit told people to break things saying it would make them feel better,” said Gravy. “You have footage of skinheads jumping over fires and it was aired over and over,” says Gravy. “They also said that people were being charged $4 for water, but that was the designer bottled water, the water that came out of the tap that they didn’t mention, was free,” he said.

The spirit of Woodstock, according to Gravy has never diminished even with the past festivals in which the negative aspects were overstated; “Out of the 400,000 people at Woodstock, only 6 were arrested,” said Gravy. Gravy does not believe that the ideals of the 60’s are dead as headlines from the 1999 Woodstock festival would suggest.

Wavy Gravy doesn’t seem to be slowing down (at least in his activism) at his ripe old age of almost 73. Seva continues to cure the world of blindness, camp Winnarainbow is still offering summer sessions for children and adults alike. His full length documentary “Saint Misbehavin” is currently in post-production and he will be promoting the film at the Traverse City Film Festival. Michael Moore who has a similar approach as well as a “similar pot belly,” says Gravy will also be featured at the festival.

It doesn’t seem as though the hippie ideals of peace and well-being toward fellow human beings will be allowed to die on Wavy Gravy’s watch. 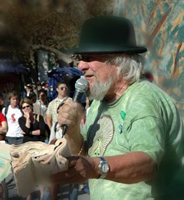 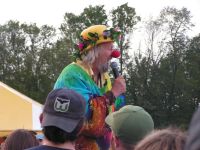